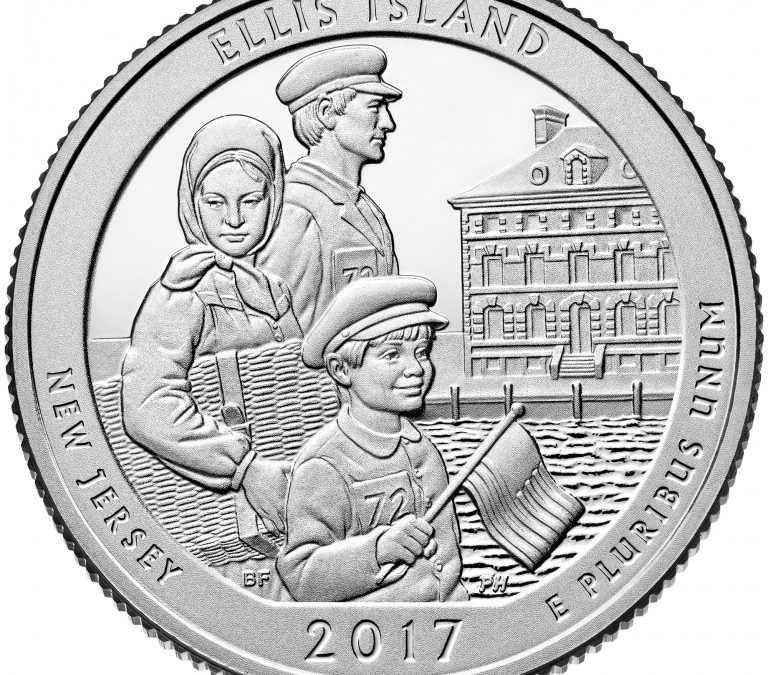 Your coin collection is about to get a jumpstart. From 1892 through 1954, Ellis Island was the largest immigration hub in all of the United States. Its history is unparalleled, adding culture to the past, and now, the United States Mint has released a commemorative quarter with Ellis Island printed right onto the back. This was the last thing we were expecting on our currency, and one of the best surprises that any self-respecting coin collection connoisseur could ask for.

Premiering on either side of our nation’s currency has always been a feat of legendary proportions. The new coin premiers the words Ellis Island along the top, with an engraved image of a man, woman and child, holding the American flag, approaching an onshore building (hospital) from their boat. You can even see detailed work of the harbor banisters.

Along the base of this exceptional piece of currency is the year of production, 2017, as well as the words New Jersey, and E Pluribus Unum, which in Latin means “Out of many, one.” Designed by Barbara Fox, from the Artistic Infusion Program, and Phebe Hemphill, a Sculptor-engraver, we get a truly historical piece of imagery to add to our coin collection.

With the release of this exceptional currency piece on August 28th, 2017, we are given the option of purchasing these in either rolls or bags. Initially, there were a total of eight different designs for this currency release, which would have been quite a spectacle for any coin collection—instead, the Secretary of the Treasury made their final decision, which was slightly altered from one of the initial designs. In the original design, we don’t see the small boy holding an American flag, but instead standing idly by.

If you are interested in purchasing a roll or bag of these limited edition, Ellis Island commemorative coins, you can purchase them from the following US Mint Production Facilities below.

This has been greatly anticipated by all coin collection moguls across the nation. On August 30th, 2017 at approximately 11:00 AM, a launch ceremony will be held at Ellis Island’s Flagpole Area. Post-launch ceremony, there will be a coin collector forum which gives everyone a chance to learn about this historic piece of currency.

There is controversy arising among avid coin collection enthusiasts, stating that this commemorative currency piece does not bear any stars among the top-left corner of the flag depicted in the small boy’s hands. It has some up in arms about the attention to detail taken by the US Mint, or in this case, lack thereof. It begs the question: will the US Mint issue a recall of their commemorative Ellis Island coins, or simply ignore this detail?