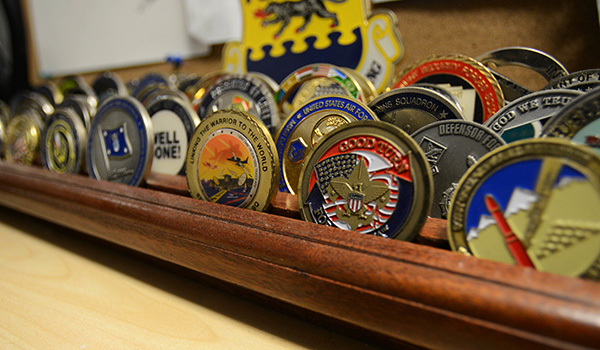 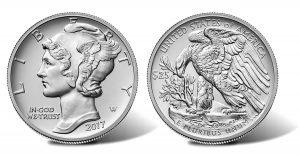 The obverse design features a high-relief likeness of “Winged Liberty” from the “Mercury Dime” obverse by famed American coin designer and medallic artist Adolph A. Weinman.

The reverse design features a high-relief version of Weinman’s 1907 American Institute of Architects (AIA) Gold Medal reverse, which includes an eagle and a branch. In developing the coin, the United States Mint was able to use the original reverse plaster of the AIA gold medal. This is the first time that Weinman’s AIA design appears on a U.S. coin. 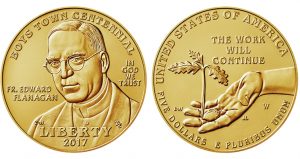 The obverse “heads” design features a portrait of Father Flanagan.

The reverse (tails) design features an outstretched hand holding a young oak tree growing from an acorn. As stated in the idiom “Mighty oaks from little acorns grow,” this design represents the potential of each child helped by Boys Town to grow into a productive, complete adult. 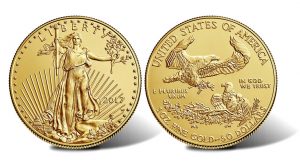 The United States Mint made numismatic history in 1997 when it produced its first legal tender platinum piece—the American Eagle Platinum Proof Coin. Its $100 face value is the highest denomination for a U.S. legal tender coin. Produced for collectors, it bears the “W” mint mark of the West Point Mint where it is produced. This precious metal coin has a limited mintage and may be purchased directly from the United States Mint.

Since its inception, the American Eagle One Ounce Platinum Proof Coin has shared a common obverse (heads) that features a portrait of Liberty. The coin’s reverse (tails) has featured a variety of themed series designs, including “Vistas of Liberty,” “Foundations of Democracy,” “The Preamble to the Constitution,” and “Torches of Liberty.” 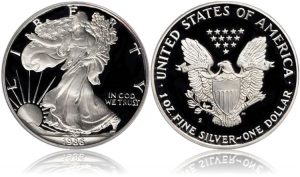 The American Silver Eagle is the most popular bullion coin in the United States, containing a full ounce of .999 fine Silver. The mirror like Proof finish on this coin only adds to the beauty of this valued investment. 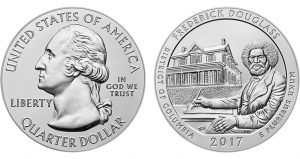 The coin’s reverse was designed by Thomas Hipschen, an artist with the U.S. Mint’s Artistic Infusion Program, and a former engraver for U.S. paper money with the Bureau of Engraving and Printing. The design was sculptured by U.S. Mint Sculptor-Engraver Phebe Hemphill.

The reverse depicts Frederick Douglass seated at a writing desk with his home in Washington, D.C., in the background.

The obverse bears then U.S. Mint Sculptor Engraver William Cousins’ rendering of George Washington, first used for the State quarter dollar series of 1999 to 2008. Cousin’s work is based on sculptor John Flanagan’s original portrait of Washington as executed for the Washington quarter dollar, introduced in 1932. Flanagan’s portrait of Washington was based on a bust of the nation’s first president by French sculptor Jean-Antoine Houdon. 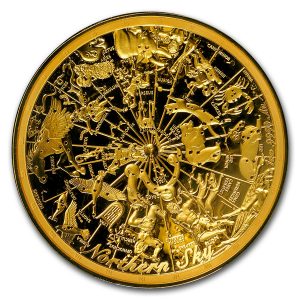 Despite all of these exciting new additions to the numismatic world, no approach has been nearly as well-received by collectors as the innovation of domed, or curved, coins, in which one side of the coin is concave and the other is convex. Although domed coins are no longer novel since at least two dozen such pieces have been issued so far, these coins do continue to garner huge popularity.  The reason is not just the appealing shape itself, but also the way that it effectively represents certain themes. This is particularly true for coins representing the massive dome of the night sky! 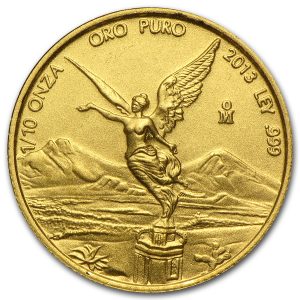 On the obverse of each coin you’ll find the image of Winged Victory. An important symbol in Mexican culture since the nation’s independence from Spain, Winged Victory symbolizes victory in battle and freedom from the oppression of others.

The reverse of the 2016 1/10 oz Mexican Silver Libertad bears the image of the modern coat of arms of Mexico. In the official seal, a bald eagle is featured sitting on the arm of cactus while it struggles to contain and defeat a snake. Adopted during the country’s struggle for independence, the imagery represents the nation’s attempts to rid itself of Spanish rule. 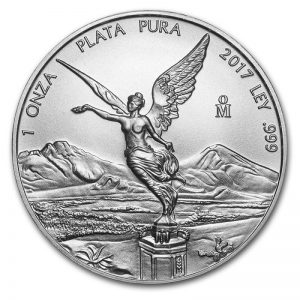 Layers of symbolism characterize this beautiful coin. Its obverse features the Angel of Independence, located in Mexico City. Also known as “Winged Victory,” this statue stands atop a victory column that serves as a mausoleum for the Fathers of the Mexican War of Independence. Winged Victory carries a laurel wreath in her right hand and broken chains in her left. Inscriptions on the obverse include “1 kg PLATA PURA” and “LEY .999,” as well as the date “2017” and the Mexican Mint mark. The   reverse features the current Mexican Coat of Arms surrounded by previous versions of the Mexican Coat of Arms, as well as the inscription “ESTADOS UNIDOS MEXICANOS.” 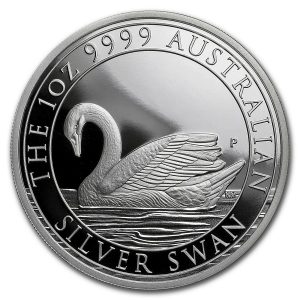 The first coin of a new bullion series from a major mint with a popular design and a low mintage is another example of a coin that has “winner” written all over it, especially when the coin was not previously announced — resulting in some dealers being caught off guard and having to buy coins from customers.