This month, in my continuing series of signed currency in my collection, the so-called “short snorters,” we will look at some more of my favorite notes. These are the short snorters signed by famous people of the day: politicians, entertainers, high ranking officers, etc. I hope you will enjoy viewing these notes; I have had most of them for many years, and this is the first time any of them have been published.

This particular presentation is particularly pertinent in light of the recent high price realized by a short snorter signed by President Harry Truman and Soviet leader Joseph Stalin, among others. There clearly is a lot of serious interest in historically important autographed notes. I am fortunate to have a few among my own holdings.

The first one to show you I have had for more than 20 years, and is the only so-called short snorter signed by an important personage that I have ever purchased as such. All of the others I found here and there sold merely as short snorters with no identified signatures. This one is a Series of 1935-A $1 Silver Certificate ascribed to Lt. Morton Marborg. Though covered with signatures, it boldly displays the signature of none other than Edward, Duke of Windsor, late King Edward VIII of England. His signature “Edward” underlined, just above the left-hand serial number, is bold and clear. I have compared it to others of the Duke, and it is identical.

How did Edward, Duke of Windsor, come to sign this note, and who are all of the other signatories? Honestly, this is still a mystery to me. There are several signatures of lieutenants and a captain, and what appear to be crew members of either a ship or plane. The Duke of Windsor spent most of the war as Governor of the Bahamas and did make a few trips to the U.S. during that time. I simply have not been able to locate any information about the other signers. Some include: Lt. Joseph T. Camilleri, Captain R. Huff, Lt. Henry Nan and Angus Vincensi. All I really do know is that the signature of Edward VIII is genuine. 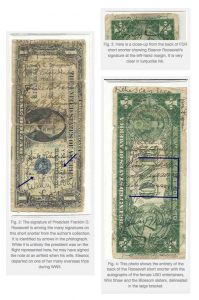 Another intriguing item is another 1935-A $1 inscribed “SHORT-SNORTER A.L. 11/1/42.” This, like many others, is covered in signatures on both sides. However, among the signatures are found none other than Franklin D. Roosevelt and Eleanor Roosevelt. Eleanor’s signature is particularly prominent in turquoise ink in the reverse left margin. In addition, several minor entertainers’ signatures are also found: Wini Shaw, an American actress and USO troupe; Helen and Dorothy Blossom, Vaudeville actresses and USO troupes; Lt. Colonel M. Jackson (?); Joette (?), Wallis J. Currie (signed twice), etc. 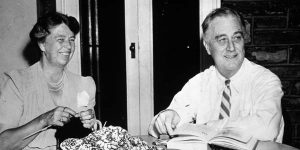 I cannot find any references whereby FDR and Eleanor would have traveled together by plane any time in 1942. I gather that this note represents a long-term short snorter, with signatures gathered over a period of time after 11/1/1942. Eleanor Roosevelt made many trips to Europe during the war to visit the troops; clearly she may have been accompanied by USO troupes. Perhaps Franklin Roosevelt accompanied her to an airfield on departure, and his signature was then obtained. Most of the signatures on this note are sloppy or obscured by the back design.

The fun part about this note was that I obtained it at the FUN show in Florida many years ago from a major dealer who had a box of short snorters. When I asked to look through them, he told me, “You won’t find anything good in there, I checked them all out.” Well, I guess he didn’t check them out very well.

A Series of 1935-A $1 Hawaii note caught my eye even though it only bore three signatures. I examined it and immediately saw that underneath one signature were the words “Lieutenant General.” The modest price of $15 was quickly paid. I soon identified the signatures as Robert C. Richardson, Lieutenant General; Edwin H. Randle, Brig. Gen.; and A.D. Bruce, Maj. Gen. 77th Div. This was quite a find!

As it turns out, each of these men was an important leader in the War in the Pacific. 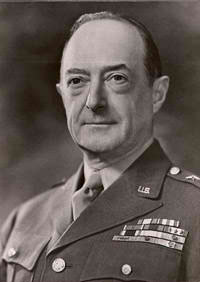 Lt. Gen. Robert C. Richardson was promoted to that rank in June 1943 and appointed Military Governor of Hawaii, Commanding General of the Hawaiian Department, and administrative commander of all military personnel in the Pacific (COMGENCENTPAC = Commanding General Central Pacific). As the administrative commander, he oversaw all the Army’s planning, logistical preparation, training and force deployment efforts as part of the overall U.S. joint forces island-hopping campaign that led to the surrender of Japan. His army ground and air forces fought in all the major central and mid-Pacific battles under the operational command of Admiral Nimitz. Lt. Gen. Richardson stood in the front row of senior leaders who witnessed Japan’s formal surrender on the deck of the USS Missouri. 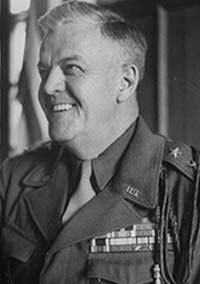 Major General Andrew D. Bruce assumed command of the famed 77th Infantry Division in June of 1943. Under Bruce’s leadership, the 77th Division fought in the Pacific War, participating in campaigns in Guam, Leyte and the Ryukyus. At Leyte, in the Philippines, the division was responsible for taking Palompon, the last main port the Japanese held on the island. During the 10-day battle for that area of the island, from Dec. 21 through Dec. 31, 1944, the division estimated that they had killed 5,779 Japanese soldiers and taken 29 prisoners, with only 17 Americans killed, 116 wounded and six missing in action. In April 1945, the 77th Division was ordered to seize the island of Ie Shima in the Ryukyu Islands so that the U.S. Army could use the island’s airfields to support assaults on Okinawa and other islands in Japan. During the six-day battle to secure the island, 4,706 Japanese soldiers and civilians were killed, while 172 Americans were killed, 902 were wounded and 46 were missing. During the battle, famed war correspondent Ernie Pyle was killed. Major General Bruce and his men buried Pyle on the island, later erecting a monument to him. After the surrender, Gen. Bruce was appointed Governor of Hokkaido. After the occupation, he became the third president and first chancellor of the University of Houston.

Brigadier General Edwin H. Randle was Assistant Commander of the 77th Infantry Division under General Bruce. He was active on shore during most of the Division’s actions and met daily with General Bruce. He was heavily involved in the actions in the Marianna Islands and the taking of Ie Shima. He authored the book, Safi Adventure: The First Operation of a Famous Regimental Combat Team, after the war. 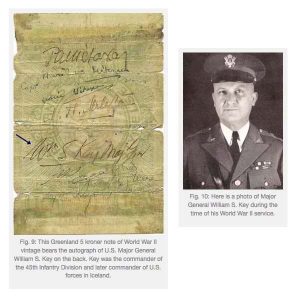 Last for this month is a rather tattered Greenland 5 kroner note, P-15d, of World War II vintage, a very unusual short snorter base type. Several signatures are on the back of the note. There are three members of the Metaxas family. I have been unable to verify this, but they could likely have been exiled relatives of Ioannis Metaxas, the Prime Minister of Greece from 1936-1941. Most prominent among the signatures is that of Major General William S. Key.

William S. Key was an Oklahoma man who was a Democratic candidate for governor of that state in 1938. He became a Major General in the Oklahoma National Guard and from September 1940 to October 1942 was the commander of the 45th Infantry Division, regular army, and commandant of Fort Sill. In 1942, he was appointed as provost general marshal in Europe. From June 1943 to December 1944 he was the commanding general of the U.S. forces in Iceland. Key then served as the commanding general of the forces in Hungary and as chief U.S. representative on the Allied Control Commission for Hungary from January 1945 until his retirement in August 1946.

The note may have been signed on a flight from Greenland to Iceland or from Iceland back to Europe when General Key took up his role as commander in Hungary. The other signatures on the note are hard to decipher; several appear to be foreign, though there are signatures of one captain and one lieutenant colonel.

This concludes this month’s section on short snorters in my collection. I will have some others of a more varied interest to show you next month.

Readers may address questions or comments about this article to Mark Hotz directly by email at markbhotz@aol.com.

This article was originally printed in Bank Note Reporter.