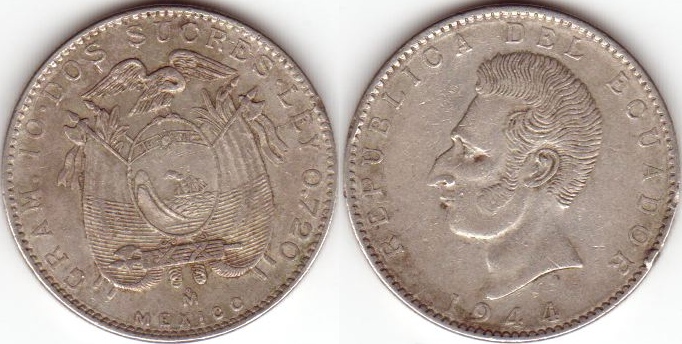 The early silver coins of Ecuador are very rare yet not that difficult to find and acquire, as few people are collecting them in the present. From logical and historical perspectives, these are good values. The early silver coins are those minted after Ecuador became fully autonomous in 1830 and before 1863.

It is curious that the early silver coins of Ecuador were specified to be two-thirds (66.67) silver rather than at least seven-eighths. During the last 750 years, it has been unusual for silver coins to be less than three-fourths (75%) silver.

The word “fineness” refers to the precious metal content of a coin on a scale of one to one thousand, which is noted in a manner similar to the way that baseball batting averages are written. A coin that is seven-eighths (87.5%) silver, with the remainder being base metals, is 0.875 fine, though the period and initial zero are often omitted, ‘875 fine’.

Regardless of weights, standards and purposes, Ecuadorian silver coins are appealing and fun to collect. It is not difficult to acquire type coins and representatives of a majority of dates. Early Ecuadorian coins cost less than analogous U.S. coins of similar rarity and quality.

The first three types of Ecuadorian Two Reales coins may be practically collected ‘by date’ without spending a great deal of money. The five design types are:

Coins that are two-thirds silver often tone shades of deep green, which blend well with gray colors. The just-mentioned 1835 might plausibly have appealing natural toning, though this is a characteristic that cannot be discerned from pictures. While early Ecuadorian coins will tend to have understandable imperfections, it is helpful to think about degrees of originality, and to understand the colors that tend to come about on coins of particular issues.

For those who continue after acquiring some Two Reales coins, building a somewhat complete type set of all denominations or a comprehensive collection of coins of the time period are practical options. It is not too difficult to assemble ‘mostly complete’ sets of Ecuadorian coins.