Fugio Coin – The First Coin To Have A Slogan 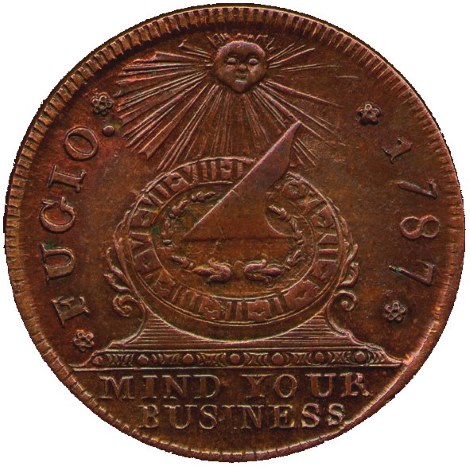 Coins were introduced as a method of payment around the 5th or 6th century BCE. Metals, nowadays serve the purposes of money chiefly in the form of coins. Originally doubtless, and occasionally in historic times, they were used in a crude state.

In 1787, Congress issued the first iteration of the American penny, which was reportedly designed by none other than Benjamin Franklin himself. Referred to informally as the “Franklin” and eventually as “the Fugio cent,” this penny prominently featured the sayings “Mind Your Business” and “We Are One” along its sides. The 1787 copper coin also bore images of thirteen connected chain links to represent the original states. There are a reported 55 (slight) varieties of the Fugio cent.

The sun and sundial on this coin symbolizes time and together with the Latin word fugio (“I fly”), they express the idea “time flies.”

The reverse of the coin features 13 links of a chain, symbolizing the unity of the original 13 states, with generous fields around a circle containing the words united and states in a frame of the motto, we are one.

The obverse design is enchanting. Somehow it manages to cram several devices in a small space but balances them with fields to the left and right of a sundial in the center of the coin. The term fugio from the Latin, “I flee” (or “I fly”), is to the left of the sundial and the date, to the right, creating more balance. The beaming sun is at high noon. The sundial rests on a base that forms a foundation for the bottom motto, mind your business. That motto has double meaning, as in “take care of commerce” and “stay out of mine.”

Along with the newly drafted 1787 US Constitution, congress authorized America’s first coin, the Fugio Cent. Now one of the rarest US coins has been beautifully replicated.